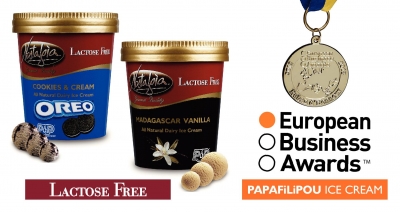 Innovation award for the lactose free ice cream for the first time in Europe.

On the 6th of June, at a prestigious ceremony of the European Business Awards 2012 / 13 held in Istanbul, Papaphilippou & Patisserie Panayiotis Ice Cream Ltd won the Ruban d’ Honneur Award for Innovation, for being the first to make lactose free ice cream in Europe. It was the first time where a Cypriot business made it through the Awards’ final where it finally won.

The European Business Awards is an Awards programme designed to recognize and promote excellence, best practice and innovation in the European business community. It is now Europe’s largest and most significant cross-sector business recognition programme.

In 2012, the European Business Awards have engaged with over 15,000 businesses in 28 countries across Europe. Over 150 esteemed judges, made up of European business leaders, academics and entrepreneurs have been involved in the robust, four-stage awards process which included written submissions, video entries judging and face-to-face presentations. Entrants have been judged on a vast array of business markers including innovation, ethics and international mind-set.